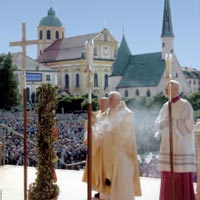 On 19th April 2005 Joseph Ratzinger became Pope Benedict XVI. From the beginning it was clear how the Pope understands his office. A name and coat-of-arms are obligatory. Pope Benedict translates the message of the Gospel into the present with his interpretation in particular of the ancient symbols of the pallium and the fisherman´s ring. The pallium represents the shepherd who carries the lost lamb on his shoulders and leads it to the water of life. The fisherman´s ring refers to Peter the fisherman, who representing Christ, became a fisher of men. This is the way Pope Benedict XVI sees his responsibility as the successor of Peter, leading human beings from alienation into the light of God.

The last pope before Benedict XVI to carry the name entered the history books as the Pope of Peace. Benedict XV (1914–1922) committed himself tirelessly towards ending the First World War. With this choice of name Benedict XVI is signalising his awareness of his responsibility for peace and reconciliation. The name Benedict refers further to the famous founder of the monastic order, Benedict of Nursia (480-547). Benedictine monks have had a decisive influence on Bavaria, the home of the Pope. Our European culture is unthinkable without Benedict of Nursia. This saint represents the continuity of Christianity in Europe. Benedictus means in translation “the blessed one.” A cautious interpretation of the name reveals Pope Benedict XVI moving “from papal history, by reaching back to a predecessor with the same name, through the monastic father Benedict and his significance for the origin and the future of Europe, to the prophecy of the salvation for all nations fulfilled in Jesus Christ.” (Cardinal Karl Lehmann)

Benedict XVI is the first Pope to relinquish the tiara as a symbol of power. In its place he uses a simple mitre with three gold horizontal stripes, representing the three powers of the papal office: Orders, Jurisdiction and Magisterium. The crossed keys are a reminder of the succession of popes in the service of Peter. New in the papal coat-of-arms is also the pallium decorated with red crosses.

The motifs on the shield already appeared in the coat-of-arms Joseph Ratzinger used as Archbishop of Munich and Freising from 1977 to 1982. The crowned Moor has been in the coat-of-arms of the Bishops of Freising for more than a thousand years. For Pope Benedict he is an ”expression of the universality of the Church, which knows no differences of race or of class, as we all 'are one' in Christ.” The bear carrying a pack is an attribute of Saint Corbinian, the patron saint of the archbishoprics of Munich and Freising. According to the legend a bear is supposed to have torn one of Bishop Corbinian´s pack-horses to pieces on his journey to Rome. As a punishment the bear had to carry the load and only when they arrived was it set free by the saint. As “God´s beast of burden” this bear symbolises the weight of office. The Jacob´s shell refers to the pilgrim people of God whose shepherd Benedict XVI sees himself as. At the same time the shell refers to the Church Father, Augustine. According to the legend he was observing a child at play trying to ladle sea-water into a little hole with a shell. At this moment Augustine realised: “So little this hole can contain the sea-water, so little can my reason comprehend the mystery of God.”

Traditionally the inauguration of a new pope takes place during a Mass a few days after his election. The formerly elaborate investiture has given way in recent times to a simpler inauguration whose core ritual is the putting on of the pallium and the handing over of the fisherman´s ring. The fisherman´s ring has belonged to the insignia of the pope since the 14th century. The ring bears – in addition to the name of the pope - a representation of the apostle Peter hauling a fishing net onto his ship. Since Pope Nicholas V (1447–1455) a fish as symbol of Christ has also been engraved on it. Until 1843 the popes used the fisherman´s ring for sealing their correspondence. After the death of each pope the ring is destroyed before the eyes of the cardinals.

Since the 9th century the pallium has been a symbol of the office of archbishop and is bestowed on them by the pope. It is a kind of stole worn over the mass vestments. Five black or red crosses are stitched onto the pallium. These symbolise the five wounds of Christ. On the pallium of the Pope three of the embroidered crosses are transfixed by nails recalling the nails of the Cross. The pallia are woven by the nuns of the Santa Cecilia convent in Trastevere, Rome. The sheep wool thread used for the weaving is also spun by the nuns of Santa Cecilia. The pallium is only worn within the corresponding ecclesiastical province. Only the pope is allowed to wear the pallium whenever and wherever he wants. The pallium is not transferable to another person and is therefore mainly buried with the deceased archbishop. Since his inauguration, Pope Benedict XVI wears a pallium with crimson crosses. This pallium does not display – as it has done for centuries - a Y shape, but rather a V shape; with the ends hanging over the left shoulder. This can be interpreted as a step by the Pope towards the Orthodox Churches, which are familiar with a similar form of pallium. Since Pope Paul VI the popes use a special crosier. The fact that the crosier is not curved is meant to show that the authority of the pope as shepherd is not limited by any earthly power.