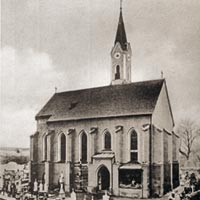 16. April 1927 – Joseph Ratzinger was born in Marktl am Inn. He is the third child of the married couple Joseph and Maria Ratzinger who had been living in Marktl since 1925. The family live on the first floor of the former administrative building and customs house in which at the time the police station is located. The father is the station commander. The family is able to remain in Marktl until 1929, but then have to move because of the father´s transfer to another town. .

“That my birthday was on the last day of Holy Week and the evening before Easter was always noted in the family history, as it is connected with the fact that straightaway on the morning of my birth I was baptised with the newly consecrated water. To be the first one baptised with the new water was seen as a significant destiny. That my life was embedded in the mystery of Easter from the beginning in this way … could only be a sign of blessing.”

Joseph Ratzinger, the father of young Joseph, is station commander in Marktl, in other words a policeman, and as a result an official of the Bavarian Free State. In the difficult times between the world wars his salary at least provides a secure income for the family of five. The Ratzinger family is not poor but have to live a simple and frugal life.

Joseph Ratzinger was born on 6th March 1877 in Rickering near Schwanenkirchen (Deggendorf Landkreis/Lower Bavaria). His parents Josef and Katherina (née Schmid) are farmers. After leaving school the second child from a total of eleven brothers and sisters earns his living as a farm hand. At twenty he is conscripted into the army. His two-year national military service is spent in Passau and afterwards he becomes a reserve non-commissioned officer. In 1920 Ratzinger becomes a police officer in the Royal Bavarian Gendarmerie Korps. In his 35 years of service as a policeman he changes his place of work 14 times. He is 48 years old when he comes to Marktl on 1st May 1925. He already married the cook Maria Rieger in 1920, having made her acquaintance during the times he is stationed around the Chiemsee. The father from Pope Benedict XVI is a deeply religious person. He holds the NS regime in contempt.

Maria, the mother of Pope Benedict XVI. was born on 8th January 1884 in Mühlbach near Oberaudorf (Rosenheim Landkreis/Upper Bavaria). She is the eldest of eight siblings. Her mother Maria Peintner comes from the Pustertal in South Tyrol. The father Isidor Rieger comes from Welden in Swabia (Augsburg Landkreis). In Rimsting in Upper Bavaria, Maria and Isidor Rieger run a bakery. The baker´s daughter Maria Rieger trains as a cook and afterwards works in various private households such as for a Czech impressario in Salzburg and a general in Wiesbaden. She later takes up a position as dessert chef in the Hotel Wittelsbach in Munich.
On 9th November 1920 Maria marries the police station commander Joseph Ratzinger in Pleiskirchen (Altötting Landkreis). There she gives birth in 1921 and 1924 to the children Maria and Georg. In Marktl following the move of the family in May 1925 she gives birth to Joseph, her third child.